More Cowbell is a comedy sketch that aired on Saturday Night Live on April 8, 2000. The sketch is presented as an episode of VH1’s documentary series Behind the Music that fictionalizes the recording of the song “(Don’t Fear) The Reaper” by Blue Öyster Cult. It featured guest host Christopher Walken as music producer “The Bruce Dickinson”, and regular cast member Will Ferrell, who wrote the sketch with playwright Donnell Campbell, as fictional cowbell player Gene Frenkle, whose overzealous playing annoys his bandmates but pleases producer Dickinson.

The sketch also starred Chris Parnell as Eric Bloom, Jimmy Fallon as Albert Bouchard, Chris Kattan as Buck Dharma, and Horatio Sanz as Joe Bouchard. It is often considered one of the greatest SNL sketches ever made, and in many “best of” lists regarding SNL sketches, it is often placed in the top ten, being ranked number nine by Rolling Stone. As a result of its popularity, “more cowbell” became an American pop-culture catchphrase.

Christopher Walken has had many searingly memorable moments during his career. Who can forget The Deer Hunter’s “One-shot” Russian roulette scene? Or the “This watch was your birthright” monologue from Pulp Fiction? But the one everyone remembers – and wants to recite back to Walken – apparently is the “more cowbell” line from his Saturday Night Live appearance as record producer Bruce Dickinson.

The New York Post reports that Walken is still dealing with the aftermath of his SNL sketch from 2000, a part of the 25th season for the late-night comedy show. The 76-year-old cult film icon apparently feels scarred from a popular “Saturday Night Live” skit he was part of during the 25th season of the late-night NBC show in 2000.

In the sketch, Walken instructs Blue Oyster Cult band member Gene Frenkle — played by Will Ferrell — to use “more cowbell” on the group’s recording of Don’t Fear the Reaper. Hilarity ensued as Chris Kattan, Chris Parnell, Horatio Sanz, and Jimmy Fallon deal with Ferrell’s over-the-top performance. Ferrell, the host of this week’s show, told Jimmy Fallon on Thursday that Walken once told him, “You know, you’ve ruined my life.”

What Does More Cowbell Mean

More cowbell is a pop-culture catchphrase that stems from a comedy sketch about 1970s rock music. The sketch centers around a character who seems to believe that the cowbell, a simple percussion instrument, is the secret ingredient to make a song work. More cowbell can stand in for anything that a person is longing for or feels is lacking. The phrase may also be used as a simple shout-out to other fans of the sketch.

More cowbell originated with a Saturday Night Live sketch that aired in 2000. In a parody of VH1’s series Behind the Music, Will Ferrell plays Gene Frenkle, the fictional cowbell player for Blue Öyster Cult, as the band records its song “Don’t Fear the Reaper.” The other band members ask Frenkle to tone down his manic cowbell performance, until their producer, played by Christopher Walken, insists that what the recording really needs is more cowbell. In the most iconic line, Walken says “I’ve got a fever and the only prescription is more cowbell.”

The infamous sketch follows the recording of Blue Oyster Cult’s 1978 hit, ‘Don’t Fear The Reaper’, with rock legend Bruce Dickinson helping out with production. Dickinson, played by Christopher Walken, needs one thing and one thing only – more cowbell. 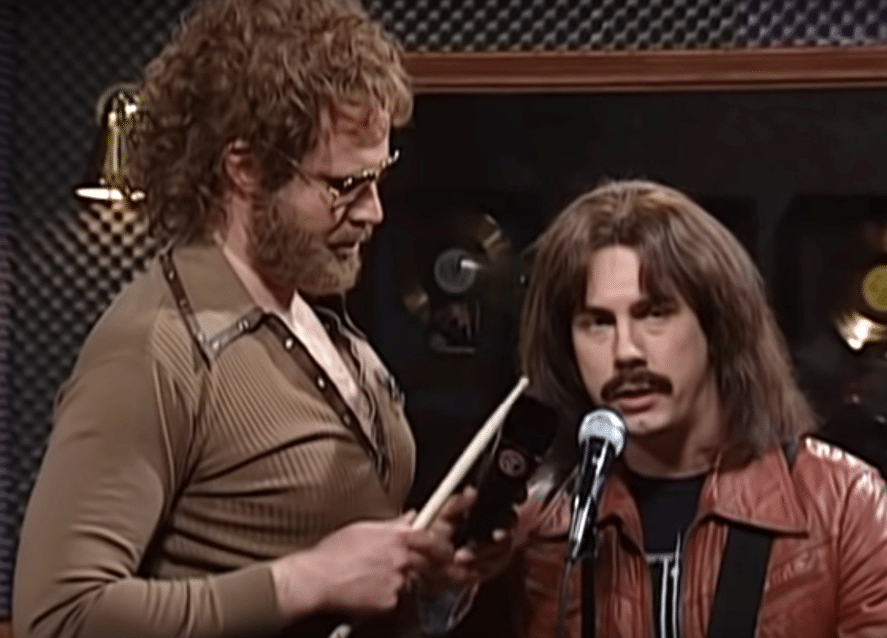 It’s hard to know precisely why it’s so funny. Maybe it’s Will Ferell smashing the f**k out of the cowbell, maybe it’s Christopher Walken remaining utterly stone-faced, maybe it’s Jimmy Fallon being unable to keep a straight face. Who knows. All we know is that this is one of the finest moments in ‘SNL’ history, and it’s now finally available on YouTube.

What Does It Mean When Someone Says More Cowbell?

More cowbell is a pop-culture catchphrase that stems from a comedy sketch about 1970s rock music. More cowbell can stand in for anything that a person is longing for or feels is lacking. The phrase may also be used as a simple shout-out to other fans of the sketch.

What Does Cowbell Mean Sexually?

Hi Kaylee=)Cowbell is that of which more is needed. If something’s missing somewhere,cowbell is needed. It could also have a sexual meaning(when a male places his scrotum in between a female’s breasts). I hope this helps )

Who Was In The Snl More Cowbell Skit?

Christopher Walken portrayed “The” Bruce Dickinson in the SNL “More Cowbell” skit that aired in 2000.

Will Ferrell Cowbell Queens Of The Stone Age?