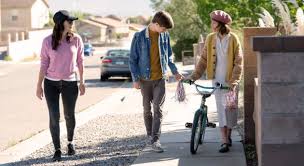 The COVID pandemic shut down the production of television shows, including DC’s Stargirl. Now that things are opening back up, executive producer Geoff Johns is taking special measures to protect the cast. While regular symptom checks can be expected, some other measures could affect certain parts of the show. Here are some of the things that may be noticeable when these episodes make it to the screen.

Now, anyone at the production site is required to wear a face covering, excluding actors who are currently being filmed. In this case, the actors should maintain social distancing protocols whenever the set and scene allows it. In other words, there is going to be a fair amount of distance between Courtney and her mom, stepdad, friends, and enemies.

Any scenes where actors are required to break social distancing should be done with as little talking as possible. Whenever there are close contact scenes without face masks, actors will have to get a negative test beforehand. This means Johns may have to limit the fight scenes. Since Stargirl is a superhero that puts the bad guys in their place without hesitation, this could change the show a little. Maybe she’ll start relying more on her cosmic staff.

The actors will need to sanitize before starting filming and refrain from touching their face until they put their masks back on. While you may not expect this to impact your show, think about the hair and makeup side of things. Actors are now supposed to do their own makeup, excluding special effects that they can’t do independently. While this may not seem like a big deal, if one of them doesn’t have the same skill level as their artist, we could end up with different looks and noticeable makeup lines.

Large crowds are going to be avoided on screen. Instead, extras are going to need the social distance in the background. Plus, any crowd scenes are going to need to be done at 25% capacity. The appointed safety officer will enforce this. These measures could make the high school scenes look a little different.

These protocols are a big step towards making television production safe again. Getting Stargirl back up took some time and planning. Fortunately, the CW had enough of the show stored up that we won’t see these protocols on the screen for at least a little longer.